I am 13 years old and am a podcast editor who likes to blog about my experiences of editing audio. I'm also a voice actor, and you can find my blog for that at VoiceofSimeon.PostHaven.com

I've mentioned Casting Call Club (or CCC for short), including my post right before this one, and it's a site where I can find over 1,000 casting calls, although unfortunately, less than 10% of them are actually paid. Even if there is a role that is paid (if you're there for the pay), most of the time it's going be $5-10. Sometimes I'll come across some that are actually pretty good (not that long ago, there was a videogame developer who needed some voice actors to play at least 10 roles, and was paying each actor $300 (except I wasn't in the age range of the characters)), and it's a very good place for practice. The projects that aren't paid, most of the time isn't worth it, mainly because anyone can host a casting call for free, so there are a lot of people who aren't very serious about their project, or who are, but end up giving up on it because they don't have enough time for it (mainly because either their work or school) . And most of the actors have really bad mic quality and aren't very good. But again, there are still some professional people there. And CCC isn't only for voice acting, it's also for singing, art, video editing, directing, producing, audio engineering , composing, and animating. But if you're starting any of those talents, I would totally recommend CCC, as it's very good for practice and getting started.

Last month I auditioned for a character on Casting Call Club, a site where I can audition for casting calls. I auditioned for a character (young Luke Skywalker), and they chose me. They then gave me the scripts for the character, and I sent my lines to them. They have a Youtube channel and make Star Wars and sometimes Marvel comic fandubs, and put sound effects and voices with the pictures of the comics. It's really cool, and if you want to see them, you can click here.

I've now played as 4 different characters for them, and they have a group chat with all the actors, the director, and the sound designers. It's been a great opportunity to connect with other actors and a good way to practice VO.

Recently I learned a very useful tool in Audition; the Noise Reduction Process. This came in very handy when editing a podcast and there's a lot of bad white noise in the background. Well, this effect saves the day! If I select a piece of white noise from an episode (it has to be only white noise by itself) then right-click it and click "Capture Noise Print", then select the whole episode (or wherever you want it to take out the white noise), then go to the "Effects" rack, then select Noise Reduction/Restoration > Noise Reduction (process), it'll lead me to the control panel where I take it out. 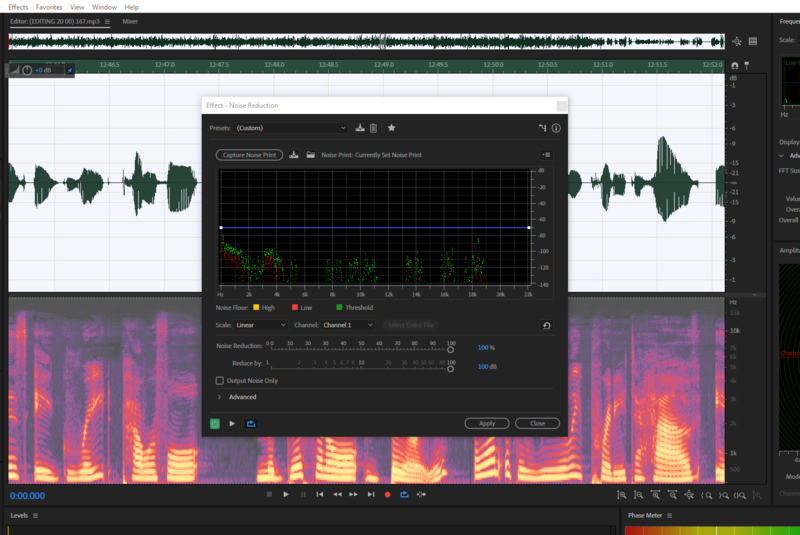 The waves in the panel might be bigger or smaller for yours (depending on how loud the white noise is). You might notice that I put the noise reduction strength at 100% and 100 dB (Decibels). I think that's the best way because it gets as much as possible out. Now, it doesn't get all the white noise out; only when the guest or host is not speaking. But it does slowly go down when they're done talking; so that it doesn't sound like it was cut out.
I hope this helped you (if you use Au) in not just podcast editing, but any audio.

Whenever I finish editing a podcast, I always run it through a program called "Auphonic", which will level out the decibel level, remove any weird hum throughout the podcast episode, and level out the stereo sound. We started using this program about 2 months ago. It's helped out a lot and especially helps out when some spots are quiet or other spots too loud. We've learned what helps is if we take out a little of the top part of the editor screen, it gets all of those annoying saliva sounds. I've also learned some new to do besides just editing a podcast, because one of my clients asked if I could get 2 excerpts from the episode so that she could use them to advertise on Facebook. That started about 2 weeks ago.

Also, I have another blog for my voice over (yes, that's another passion of mine that actually started me in editing by learning a lot about Audition), and the address is voiceofsimeon.posthaven.com. Hope you enjoy that blog too!

Not-so-recently I listened to a podcast about a radio drama me and some of my siblings like listening to, and they were interviewing an actor named Jess Harnell, Who plays as a main character in the show. I just have to say, he can do AMAZING voices! He's been in lots of movies including Cars, Transformers, Ice Age, Toy Story, Despicable Me, WALL-E, and lots more. I love all the different voices he does, including accents and impressions of people like Arnold Schwarzenegger, Christopher Walken, and the Beatles. I especially love the voice he does for the character in the show; Wooten Basset.

Here's the clip of the interview:
Download aiopodcast17.mp3
Older Newer